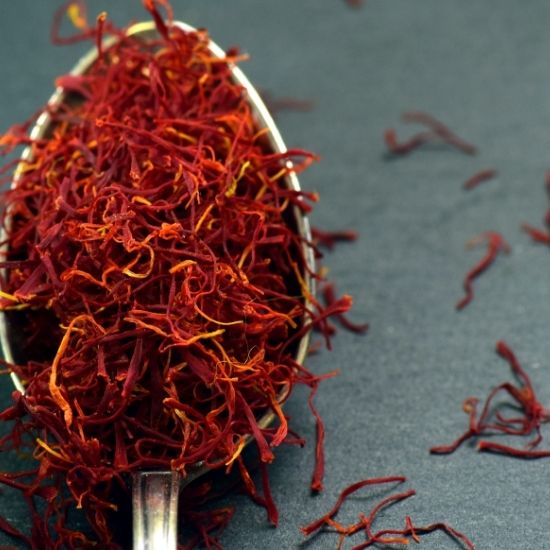 Saffron comes from the Crocus flower and grows in Northern Greece, in the region of Kozani. Saffron is a delicious spice, which although many people know in recent years, seems to have been known since antiquity! It is said that Cleopatra was the one who saw its importance for cosmetic use and Aeschylus as a way to dye fabrics. In modern times, saffron is used in cooking, cosmetics, dyeing, pharmaceuticals.

It is said that Crocus was a friend of the god Hermes. One day, while the two friends were playing, Hermes accidentally hit his friend and he died. At the spot where Crocus died, a flower grew. Three drops of Crocus' blood fell on the flower and these became the stigmata of the flower. Since then, the flower is called Crocus and the stigmata, saffron.

According to Homer's Iliad, Homer referred to the saffron with the following words: "The Sunrise drew her crocus-like scarf over the sea to bring light to Gods and men alike."

It also seems that the ancient Minoans cultivated saffron during the Late Bronze Age in Crete. However, afterwards the cultivation disappeared from Greece.

Saffron is mainly used in cooking, pharmaceutical, and cosmetic industries all around the world. The countries of Iran and Spain also produce saffron, but Greek saffron is considered the best in the world. It is scientifically called "Crocus Sativus Linneaus".

During the 17th century, the production of saffron came to the area of Kozani, by Greek Macedonian traders, who brought the plant from Austria. Climatic and soil conditions made the area ideal and have allowed the cultivation of saffron for the last 300 years or so. Now the annual production is about 1.2 to 2 tons.

The flower harvest begins around mid-October. All harvesting is done by hand, as the use of a spade or tractor is strictly forbidden. The stigmas (saffron) are then taken from the flower and dried carefully so that they do not lose any of their properties. After drying, the stigmas reach 1/5 of their original size. As a result, from 1 kg of raw stigmas, we get 200 gr. of saffron ready for consumption.

Autumn is the best time to visit Krokochoria (= the villages of Crocus/Krokos) and see the saffron harvesting process.