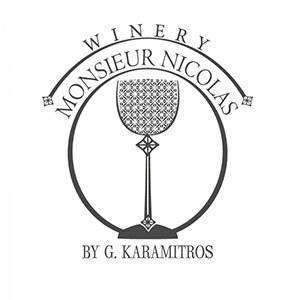 FIVE CENTURIES WITH THE AROMA & AFTERTASTE OF A GOOD LIFE

A setting with breathtaking beauty, a real-life fairy tale and people who tell their story, from the Middle Ages to the present, through the ‘Art of Wine’.

Chestnut and oak trees give the horizon its blended colour. The Agrafa “Sleeping Beauty” – if you squint a little, the mountains form a shape of a female form in repose – casts its shadow over the plain.

It shields the tiny villages, safe in its welcoming embrace, and protects them from invaders.

People raised between the earth and sky, their faces creased by hard work, mornings damp with rain and afternoons sizzling in the sun.

A LONG JOURNEY WITH DEEP ROOTS

The village of Messenicolas lies nested in this warm embrace.

A small village with a long history, endowed with an unexpected legacy: a fascinating tale.

This story does not begin “once upon a time”, but with an arrival. That of Monsieur Nicolas (Messie Nikola), a Frankish nobleman who ended up in the area in 1455 after his battalion disbanded. Charmed by the village and its surroundings, he settled in to start a new life.

Monsieur Nicolas carried with him the French wine-making culture and his love for grape-growing.

This led him to systematically develop viticulture in the region and particularly the “Black Messenicola” varietal, a unique type that grew in the area since antiquity.

The locals gave his name, which they pronounced to sound like “Messenicolas”, to the village and to the grape variety, as a modicum of appreciation for his contribution to the grape-producing and wine-making heritage of the area.

“My dream is to make the history of Messenicolas village, the local varietals and particularly the ‘Black Messenicola’ grape known in all corners of the world.”

More than a century ago, the foundation for the future put down deep roots in fertile soil. The roots grew into tall trunks, looking to the future.

The future is now fourth-generation winemaker George Karamitros' “WINERY MONSIEUR NICOLAS”, a springboard for innovation and the international recognition of its wines.The starting point of the journey of the local varieties and the village of Messenicolas near Karditsa to the rest of the world.

While still under Ottoman occupation, the Greeks moved around constantly in search of better living conditions.

Among them was the Karamitros family, which left the Evrytania region to settle near the Agrafa mountain range, in the tiny village of Messenicolas.

The family put down new roots and began to cultivate grapes, an occupation that would shape the life and history of the family for four generations and to the present day.

After the liberation of Greece, Giannis Karamitros began to barter the fruit of the vineyards, converting grapes, must, wine and tsipouro (pomace brandy) into the wheat and corn necessary for survival.

During the Balkan Wars, great-grandfather Giorgos Karamitros fought for the liberation of Thessaly.

After the end of the war in 1913, he returned to Messenicolas to take over the grape cultivation and winemaking from his father as the next link in the family’s history.

At the end of World War II, the Karamitros family did what it could to regroup. During this difficult period in Greek history, all they could do was dream of the future.

The year 1959 was perhaps one of the most important years in the history of Messenicolas and the region.

That was the year that the idea of Nikolaos Plastiras to create an artificial lake in the area was completed. The lake that was named after him, this gigantic body of water, created a favourable microclimate in the region that turned out to be ideal for viticulture.

Giannis Karamitros (the younger) takes up the thread of the family’s history around 1960 and begins to unravel it in his own way.

With new ideas generated by his unique talent for identifying market demand, he added new vineyards, replacing aged vines with newer ones and testing new varieties.

The 1970s and 1980s were a prosperous period for Giannis and his wife, Giannoula. The wine and tsipouro they produced was very popular with wine-lovers both in the region and beyond.

In 1990, Giannis and Giannoula Karamitros handed the business over to their son, George Karamitros, though they remained actively involved. They were present from dawn to dusk every day, checking on the vineyards, monitoring fermentation, imparting their knowledge and, at the same time, being kept abreast of every new development in wine consumption, trade and technology by their son, Giorgos.

For history to continue, it must take a step forward. Create a new tradition. That is exactly what George Karamitros is doing. Raised in Messenicolas, “fermented” in winemaking and finally “matured”, he relies on his childhood memories to fuel his creativity.

Sort Alphabetically: A to Z
12 Per Page
Home/Winery Monsieur Nicolas